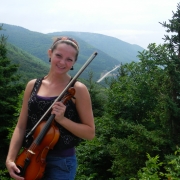 âMusic expresses that which cannot be said and on which it is impossible to be silent.â

Music has been a huge part of my life and continues to be as I have the opportunity to share it with others, through teaching and performing. Did you know that music is the only discipline that grows and uses the entire brain all at once, it is amazing! But music not only changes your brain and helps it to grow and be healthy, it soothes your soul and allows a person to express themselves like never before. Victor Hugo once said, âMusic expresses that which cannot be said and on which it is impossible to be silent.â

Name: Nadia (Full name will be provided upon registration)

I am a Canadian musician who has played violin and piano for over twenty years. I grew up performing classical music through the Royal Conservatory of Music method, and participated in many competitive festivals.

In addition to my classical violin training, I grew up performing fiddle music at various fiddle camps in Alberta, and was a part of a fiddle band called the Trixie Chicks. The Trixie Chicks traveled all across Alberta for six years performing at various venues, festivals, and concerts, including a CD release concert for Brett Kissel. The Trixie Chicks were very popular at the Fringe Festival in Edmonton and got the opportunity to record their very own CD with a variety of fiddle and Celtic repertoire.

I chose to further my musical aptitude by completing a Bachelor of Music degree at the Kingâs University in Edmonton. I finished my degree with honors with distinction in 2014 and I am currently teaching private music lessons from my studio in Edmonton. I began teaching music in 2009 from my own studio at home, and at various music schools which include Millwoods Music School, Dominelli School of Music, and Long & McQuade.

Additionally, I have also taken part in singing soprano within many different choirs throughout Edmonton including the Chamber choir at the Kings University.

Music has shaped my life in every aspect and I am so thankful that I am able to teach others and help them on their own music shaping pathway.

I have participated in the Sherwood Park Music Festival for over 10 years with high grades and I have had the pleasure of adjudicating the Kiwanis festival in Edmonton.
I am currently accompanying some of my violin students for their RCM examinations and am actively teaching theory and composition to some of my other music students.
I thoroughly enjoy being apart of so many peoples' musical journeys and am looking forward to being apart of yours!

-Bachelor of Music with distinction

Book an Interview with Nadia

Complete an online form and Nadia will call you within 24 hours to interview and discuss a lesson time. Remember there are no charges processed if you decide not to book a lesson after speaking on the phone.

Book an Interview with Nadia