COVID-19 Service announcement - We can still serve you! 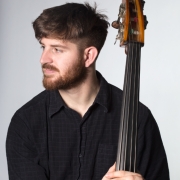 In your Home
Online Lessons

For students of all ages my approach to practice and feedback is grounded in positivity and patience.

I believe that as a teacher my biggest responsibility is to foster each student's relationship with music. Being interested in what you learn is primary to the educational experience; instrumental technique, discipline and focus, even learning repertoire all follow from listening to music and relating to it. This is why I focus on teaching students material from genres they are personally interested in, and on creating emotional connections with new pieces and unfamiliar genres. This approach is complemented by exercises designed to develop a student's ear so that they can hear the relationship between what they learn, what they listen to, and their own playing.

I also emphasize the importance of physical technique in maintaining health and comfort while playing music, and love to teach music theory in a way that connects abstract ideas to familiar sounds. For students of all ages my approach to practice and feedback is grounded in positivity and patience- learning takes time and I believe we are better served by practicing something thoroughly than rushing through it or being scared of making mistakes.

Name: Wesley (Full name will be provided upon registration)

I have a BA in music from Humber College, where I majored on upright and electric bass. My studies there included classes in performance, composition and arrangement (with Rex Hotel Orchestra director John McLeod), theory and ear training, and recording. I had the pleasure of studying bass with Mike Downes and studying jazz performance in an ensemble with the legendary Pat Labarbera.
I studied piano with both classical and jazz teachers from ages ten to eighteen, achieving my grade 8 RCM. I also studied drums and percussion from age twelve to seventeen, both with a private lesson instructor and at the Peterborough Collegiate integrated arts school, and have played guitar since I was fourteen, studying with a variety of teachers in contemporary styles.

I have worked as a performer in the Toronto music scene for the past four years, gigging regularly as a bandleader and sideman in jazz, folk, rock, soul, funk, bluegrass, Celtic, Mediterranean, pop, and afro-beat bands. This has involved performing on guitar, percussion, bass, and keys, as well as transcribing and arranging songs for cover bands and composing original music.
In 2017 I attended Spectrum Music's New Voices composer workshop led by composers Sundar Viswanathan and Chelsea McBride.
I have worked in sound engineering for live concerts and events since 2010 which has enriched my perspective on audio, acoustics, and performance.

My ensemble The Anthology Project (a ten-piece jazz band performing original compositions) was selected as band of the year 2018 by the T.U. Jazz Festival.
In 2016 I was awarded the Lenny Boyd Bass Award at Humber College.

Book an Interview with Wesley

Complete an online form and Wesley will call you within 24 hours to interview and discuss a lesson time. Remember there are no charges processed if you decide not to book a lesson after speaking on the phone.

Book an Interview with Wesley