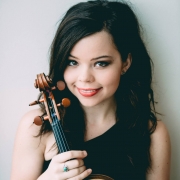 In your Home
Online Lessons

I am available to teach violin lessons and viola lessons to students of all ages. I understand that each student has unique needs and goals, and I'll cater the repertoire we work on so that the student can flourish. I was taught in the Suzuki and RCM methods and understand the values of both - I'll emphasize a beautiful, natural tone and comfortable physical approach for beginners and expand this into musical and technical development as students advance.

One of the most important things I'll focus on with students is how to practise effectively at home, outside of lessons - this is where most of the progress will happen. Lessons will normally consist of scales and technique, repertoire development and review, listening, and theory/history.

Name: Catherine (Full name will be provided upon registration)

Originally from Calgary, AB, Toronto based violist Catherine Gray is a member of the Canadian Opera Company Orchestra. In addition, she enjoys a successful freelance career with the Toronto Symphony Orchestra, the Orchestre Symphonique de Montreal, and the National Ballet of Canada Orchestra. Ms. Gray has been featured on CBC Radio, CBC Television, and BBC3, and has been described as "une altiste formidable" (Le Devoir, Montreal).

Book an Interview with Catherine

Complete an online form and Catherine will call you within 24 hours to interview and discuss a lesson time. Remember there are no charges processed if you decide not to book a lesson after speaking on the phone.

Book an Interview with Catherine